Whatever Became Of Peter W Connolly?

In October 1991 I travelled to Ternate, Indonesia. It is one the fabled Spice Islands  and now a beautiful speck in a modern day backwater. It was accessible from Java by spending four days on a government ship. There weren't many visitors at that time but I gather that's changed as Ternate is now a cruising destination. It was hard to imagine Ternate as central to European engagement  with Asia in the age of discovery and that it was from Ternate that Alfred Russel Wallace posted his essay describing a theory of natural selection, to Charles Darwin. It was also occupied by the Japanese during World War II which turned out to be  unexpectedly interesting and led to my curiosity in the fate of Peter W Connolly. 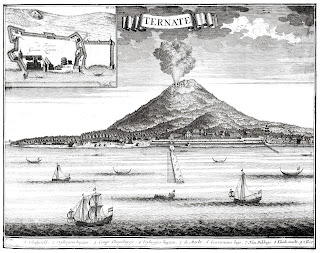 Ternate island is formed from an active volcano, also known as Gunung (Mt) Gamalama, rising from the ocean. I had ambitions of climbing Gamalama but as I didn't know a route, I set off speculatively. Part way along I met a couple of Indonesian teenage boys who offered to show me the way and a pleasant but strenuous day with them followed. One wore a pendant which resembled the dog tags American soldiers wear. The language barrier was high but he seemed not to understand the pendant's origin and was willing to part with it for a small sum. Importantly, the interest was all mine. He hadn't mentioned it or tried to sell it and nor, as far as I could tell, did these boys regularly interact with visitors. 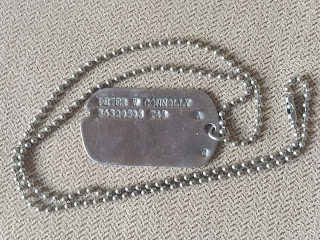 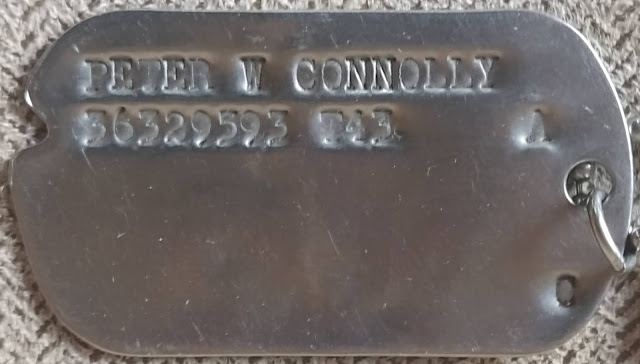 Soldiers wear two dog tags. When killed in battle, one is taken to record the death and the other remains with the corpse, so the boy's dog tag seemed likely to have been souvenired from an American soldier somewhere nearby and still missing in action. I knew little about dog tags, only a little more about  America's Pacific War and even less of Australia's involvement in the region. While fascinating, I was uncertain of the dog tags provenance. On returning home I wrote of the discovery to the American Embassy in Australia. There was no response and I stored away my tag, puzzled. As I sort through the detritus accumulated over a life time it surfaced again and I wondered if, in the age of the internet, more could be discovered.

Is it actually a US military ID/Dog tag?

I've never seen one previously, I'd mostly guessed it to be a dog tag. In 1991 I couldn't check but now I can and it matches perfectly the style issued from July 1943 to March 1944.

Even the chain is the same, though it is shorter than the regulation 40 inches. That type of chain is common though and mine is attached differently than in the photo, so an alternative explanation is that the dog tag was acquired without a chain and a similar chain was attached. The chain on mine fitted over the head of the previous young owner but is too short to get over my adult skull.

US army enlistment records for World War II were published in 2002 by the US National Archives and here is Peter's.

From this we learn Peter exists, he was an average American from the Midwest and his Army Serial Number matches my dog tag. He was Catholic with 2 years of high school education, enlisted in April 1942 as a private, was unmarried, 30 years old and previously worked as a janitor.

There is some information in the serial number. The first digit value of 3 indicates Peter was a draftee and the 2nd digit value of 6 indicates "Sixth Corps Area" which is odd because the VI Corp (United States) fought in Europe. There is no serial number range listed for the Fourteenth Corp Area. However, it was the  XIV Corp of the Sixth Army that fought the Pacific War, so the second digit value of 6 must mean the Sixth Army rather than "Sixth Corps Area". I haven't been able to discover the unit in which Peter served.

Was Peter Fighting In Ternate?

There was a Japanese garrison of about 1000 men and 350 naval personnel on Ternate when the 188th Glider Infantry, 11th Airborne Division, XIV US Army Corp mounted an assault on 1st of March 1945. They secured the Ternate area by midafternoon the following day with about 350 Japanese killed and most of the rest escaping to the islands interior (Smith, R. 1963). "US casualty figures could not be located but General Swing, the 11th Airborne divisions commander, stated that the battle cost the 11th division "significant casualties" - Swing comments, 10 January 57 (Smith, R. 1963)

So I don't know that Peter was in the 11th but he was in the Sixth Army of which it was a component and there was a battle in Ternate with significant US casualties. Peter could have been there.

Was Peter A War Casualty?

The practice was:- One of the two identification tags worn as prescribed in Army Regulations will be attached to the remains when interred. This includes any and all interments in the theater of operations the first battlefield interment, as well as the interment into a temporary cemetery for subsequent, final disposition. The duplicate tag will be removed at time of interment and attached securely to the grave marker about 2 inches from the top (Graves Registration, 1945).

The presumption is that if this is Peter's dog tag, he is still missing in action which can be checked against the US National Archives of WWII Army Casualties: Illinois - Cook County.

He's not recorded as missing or deceased. The casualty records for the Ternate assault are incomplete and so is the WWII Army casualty list though the casualty list is mostly correct and he should be there.

This makes me think if Peter was fighting in Ternate he probably survived, but then why was his dog tag left behind?

Is The Dog Tag Fake?

Unlike coins, manufacturing dog tags is not considered counterfeiting and they aren't unique like a passport. They are a label to assist with identifying war casualties, like a label in a shop identifying an individual serial numbered product.

On eBay you can buy "Genuine Dog Tags Id Military US Stainless Steel Army Dogtag" which are "Personalised" with your chosen text and I expect they are indistinguishable from one worn in combat but I wouldn't consider my one as genuine, despite the eBay definition, if it wasn't worn by Peter while on active service.

This probably isn't Peter's first dog tag because his enlistment date was April 1942, this tag was issued after July 1943, and it records a tetanus shot in 1943. The likelihood that someone in the backwater of Ternate or thereabouts was manufacturing accurate souvenir dog tags and chains for a non existent tourist trade in 1991 embossed with accurate information that wasn't published until 2002 is low.

I think it's genuine.

Are There Other Records of Peter's Death?

There are overwhelming numbers of clickbait genealogy websites, with useful information mostly behind paywalls. I was defeated, so sought professional help from Sokit1966 who discovered Peter's birth date to be 23 Dec 1912 and located his obituary, confirming the accuracy of WWII Army Casualty records with respect to Peter.


Peter survived the war, married a woman with four children, fathered two more and survived to 55, so we now know Peter's dog tag wasn't souvenired from a corpse. We still don't know why he left it in Ternate.

Do Dog Tags Have Value?

They have sentimental value in militaria collections and probably to descendants but there is little commercial value as far as I can tell.
This one is listed on eBay as genuine from the Vietnam War at a mere A$25 plus postage.

Given the huge numbers originally issued and the ease of manufacturing tags that are indistinguishable from those worn in combat, it seems unlikely dog tags will ever have significant monetary value.

What Was Resolved And What Wasn't?

The age of discovery led to European engagement with Ternate which eventually led to the arrival of the US army. The subsequent information age has made it possible to investigate a military artefact they left behind.

The artefact was likely worn there, in combat, by Peter W Connolly but the initial assumption he was still there, missing in action, proved to be false. How Peter's dog tag came to be around the neck of a teenage boy in a place Peter fought, 46 years afterwards, will probably remain a mystery, demonstrating that, as powerful as it is, even the information age has limits.